Who is the Beatdown? Understanding Roles and Resources to Take Advantage of Timings in Hearthstone, CS:GO, LoL and Dota 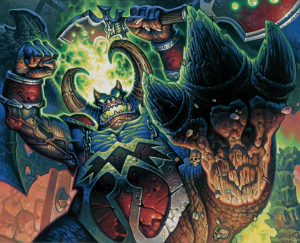 “Who is the Beatdown” might be the most essential but most overlooked principle for beginners in competitive gaming. This is no surprise. Most games we’ve played as children are fair or symmetrical games.

Traditional games are mostly symmetrical. Chess, Checkers and Go start players off with limited but equal resources. Both players have the same pieces at their disposal and try to win by outsmarting their opponents on an even playing field. Players can use their resources (e.g. the chess pieces) and try to gain incremental advantages by applying their strategy and wit to win the game. Aside from starting order, these games are inherently fair. But most competitive video games nowadays are asymmetrical.

Consequently, we can identify different roles in most games. A key to understanding is figuring out who is taking these proactive and reactive roles. A proactive player should be in an advantageous position to take action. A reactive player is trying to prevent this and get the game to a point where he himself is strongest. Players need to ask themselves: Am I the one being advantaged in this situation? Or in essence:

Who Is The Beatdown?

To leverage these advantages the proactive player (or the beatdown) needs to know when to attack. He needs to figure out a situation where his opponent is weakest and use this opportunity to improve his odds at winning.

Equally the reactive player (or the controlling player) needs to assess the situation and try to control the pace and opportunities of the game to fight when he is strongest. This is usually at a later point in the game. Let’s have a look at some specific situations.

Decks and classes in Hearthstone can be completely different and try to achieve various different goals. Some decks try to win the game as fast as possible by being as aggressive as they can. Some decks try to survive the earlier parts of the game to stabilize and win with highly costed threats. Others try to assemble some specific card combo to gain advantages. In Hearthstone an aggressive deck with its low costed cards is usually strongest in the earliest parts of the game. Aggressive players try to proactively finish the game as quickly as they can. Higher costed cards tend to have a relatively higher impact, so their lower costed cards usually can’t compete with them. This is why the proactive player tries to win the game before these cards even appear or matter. The controlling player tries to slow the game down as much as possible to ensure he can cast his high value cards.

Terrorist and Counter Terrorists approach a map in Counter-Strike very differently. Weapon selection, time limits and spawning points force both teams into different roles. Terrorists tend to be on the offensive. They try to plant the bomb or finish the enemy team in the given time limit. Contrarily, Counter Terrorists can stay back and “play the clock”. Terrorists are forced into a proactive, aggressive role. Counter-Terrorists tend to play reactively by smoking off pathways, preemptively flashing areas or, more generally, using bomb sites as cover.

In MOBAs like League of Legends or Dota, lane matchups and team composition are asymmetrical as well. Each hero or champion can only be picked once and every hero is stronger or weaker at varying points in the game. Let’s take a LoL matchup in the midlane for example. Talon vs Kassadin. Kassadin is one the most mobile champions in League of Legends. After hitting lvl 6 he gets significantly stronger and remarkably more difficult to finish because it is so easy for a Kassadin player to escape. In this situation a Talon player needs to play the beatdown as early as possible. He needs to take early trades and try to delay Kassadin’s lvl 6 as much as he can.

Equally in Dota. Certain late game carries such as Medusa or Alchemist need to be proactively pressured to not let them get into these later stages of the game where they are strongest. Most of the team compositions fighting a team with Medusa or Alchemist are the beatdown in this situation.

In all these situations, misunderstanding your role in the game can have catastrophic consequences. Not punishing a control deck in Hearthstone or a Medusa in Dota before they reach the late is usually a horrible idea. Or as Mike Flores eloquently put it:

Identifying the roles of proactive and reactive players is one of the most important aspects a new player in the world of competitive gaming can learn. Due to the nature of asymmetrical games we need to ask ourselves the question “Who is the Beatdown” at different and varying points in the game. Switching between being the beatdown and the controlling player is difficult. But it’s one thing that seperates good players from bad ones.