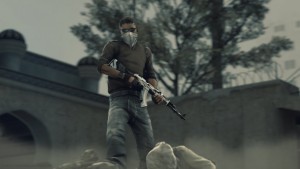 Everyone remembers the first time they shot a rifle in CS:GO. Weapons in CS:GO feel vastly different from guns in other first-person shooters like Call of Duty and Halo. Usually bullets hit where you aim them. But in Counter-Strike, the more shots you fire in succession, the less accurate they become.

To help you understand how to hit your target effectively, we want to focus on two important aspects in this article: Range and shooting rhythms.

Using shooting rhythms is an effective technique to hit targets at different ranges. We have compiled four videos to give you a rough understanding on how the AK-47 should be used on different distances. There is always some randomness involved while shooting rifles at long range. So even if you are right on the enemys head the shot might still miss. These strategies will help you minimize these factors.

The first method of shooting is called tapping. It is best suited for very long ranges (Dust 2 A Ramp -> Pit). Tapping is especially effective when an enemy is hiding behind a box and only their head is visible. Have a look at the following video to see at what range tapping is advised.

The next two methods are called Two-Round Bursting/Five-Round Bursting. It is advised to use those styles on medium to long range. Bursting is a great way to fire multiple shots at once whithout losing too much accuracy, since spraying at medium ranges can be difficult for a beginner.

Rifles in Counter-Strike are affected by recoil. You can counteract this by slightly pulling your mouse downwards. Bursting is not advised against enemies hiding behind non-wallbangable objects where only the head is visible. In this case tapping would be a better choice.

The fourth and last method of shooting is called Spraying. This style of shooting is best used medium to low range. Spraying is most effective against enemys that are not behind cover. It is also the best form of dealing with multiple enemies in a straight up firefight.

In the following video you can see how a spray can look like on close range. (note: completely overkill)

Range and shooting rhythms are great concepts to keep track of as a beginner. These four ranges and their associated shooting patterns can improve your shooting ability immensely. Try to focus on constant movement as well. While tapping and bursting you usually want to be a moving target. This is done by strafing and counterstrafing. Just strafe and press in the opposite direction of where you are moving. If you move left, you have to press your d-key to freeze your movement and do your burst/tap.

Don’t be predictable! If you went left and right the first time, try moving right twice after that. Mix it up! These are all the steps you need to be able to tap and burst effectively.

But these are just suggestions on how to shoot the AK-47 on different ranges. Everything can be mixed and nothing is fixed. Taps can be followed by bursts. Bursts can be turned into sprays. Every technique can also be mixed with crouching and sidestepping. Use these principles to your advantage and train them regularly.

We will look deeper into the movement aspects of CS:GO in a different article. For now just try using these techniques in a custom game or deathmatch and have fun.