With the new spooky Halloween update Blizzard has also released their first PvE mode with Junkenstein’s Revenge. While it’s a pretty straightforward job to dispose of Junkenstein and his minions on easy it can be a bit more difficult on higher difficulty settings, especially if you want to grab all of the achievements. So if you’re having trouble surviving the Halloween onslaught then this guide is for you.

One of the most important things in this mode is to know the timings of the bosses and use your ultimates accordingly. Since you’re here looking for advice you probably already know the timings of the boss spawns, but if you don’t then it’s a good idea to play the brawl on lower difficulties a few times. You’ll get the hang of it quickly enough. Junkenstein’s Revenge isn’t something to scoff at so make sure you are prepared.

You will want your ultimates to be up for every boss fight. Hanzo, for example, can use his ultimate during regular waves quite freely since it charges up so fast, but you still need to make sure you have it for a boss fight. You should only use your ultimate for regular mobs if you are absolutely certain you’ll get it back up again when a boss spawns. Facing a boss (or multiple bosses) without crucial ultimates is a recipe for disaster.

The absolute key to beating Junkensteins’s Revenge on hard mode is teamwork. Try to communicate important information to your team. It’s better to call for heals and get healed immediately than to wait for Ana to notice you need healing, for example. Don’t disturb sleeping enemies, don’t move around like a chimp on steroids when you need healing, don’t just suddenly leave your lane, … That kinda thing.

You should also (obviously) be familiar with the hero you’re playing. If you’ve never played Hanzo in your life you’ll just be a nuisance that’s dragging your team down when you keep missing easy shots, for example.

The first wave of zomnics and shock tires

Enemies will be coming from the ramparts on the left, the bridge in the middle and the dark room on the right. Every team will want to set up differently but I personally think it’s best to have McCree on the ramparts, soldier in mid and Hanzo on the right with Ana hovering somewhere between Soldier and Hanzo. Soldier and McCree are interchangeable but due to Hanzo’s Ph.D. in geometry (his scatter arrow) it’s probably best if you keep him on the right to spam his scatter arrows in that cramped up room.

Everyone should focus on their respective lanes (and help others as well of course) while Ana helps out on damage a bit and heals where necessary. During the final parts of Junkenstein’s Revenge everyone’s favorite sniper grandma will have to focus on healing a lot more, so if you’re playing Ana make sure to keep an eye on those friendly health bars at all times.

Always prioritize shooting the zombardiers. If they are left unattended and a lot of them are allowed to spam their shots the fight can go sideways really quickly since they do 90 damage per shot.

The launching of a shock tire will always be loudly announced so everyone will know it’s coming. Focus fire on the tire to make sure it’s disposed of immediately and then you can get back to your basic duties.

Reaper always teleports in when he enters the brawl, so even the worst Ana player should be able to put him to sleep immediately. McCree should be ulting at this point as well (the sleep prevents Reaper from wraithing away) and Ana should nano boost the cowboy. Once high noon is all charged up and fired off you’ll find that Reaper is often killed immediately afterwards. Easy pickings so far.

During Reaper’s beauty sleep no one should touch him. If he gets damaged he can wraith form away and ruin McCree’s ultimate, making it way harder than it should be to put him back into the ground. Soldier and Hanzo should focus on taking down the zomnics and help out with finishing the Reaper if necessary. Hanzo and Soldier ults aren’t really needed for this boss specifically, though obviously if you feel like you need them to finish him off you can use them.

This one is handled much in the same way as the first one. Sleep Roadhog so he doesn’t disturb anyone while McCree charges his (nano boosted) ultimate. The others should once again focus on killing off zomnics during this phase. Ana should be near the monster to slap him with her grenade once he gets his rude awakening so that he doesn’t get to heal himself. Focusing down Roadhog when he doesn’t have his self healing available shouldn’t be too difficult. Since he doesn’t move all that fast you can also Hanzo ult him for another massive chunk of damage.

They might look friendly but they need to be killed as soon as possible.

Dr. Junkenstein (Junkrat) and the Reaper

There’s a total of 4 achievements you can earn in Junkensteins’ Revenge.

It’s time for doctor Junkenstein to make his grand appearance, but if you play your cards right it won’t last long at all. About ten seconds after Junkenstein’s entry the Reaper will also spawn in the arena so it’s way easier if you (almost) finish off the doctor before Reaper enters the stage again.

To do this, Hanzo should throw his ultimate at Junkrat as soon as he appears. He can’t dodge it so he should fully eat the damage. Keep spamming arrows at him as well.  Soldier (or McCree, depending on the setup) should also focus Junkrat (soldier ult can help massively with this) while the other DPS character focuses on bringing down the zomnics. Again; focus bombardiers. If you do this correctly Junkrat should be dead or on his last hp points before Reaper appears again.

Once the Reaper goes in it’s pretty much ‘back to basics’. Ana sleeps Reaper (or Junkrat if your team failed to damage him properly), nano boosts McCree and then the gunslinger should be able to slay the most important threats with little to no issues.

This fight is the first true test of Junkenstein’s Revenge in my opinion. Things will get hectic and everyone will need to be on point to survive this wave unscathed. Ana should be healing her teammates actively and properly. Everyone should be hitting their shots and doing their jobs all while making sure they don’t get hit by bombardiers or other spam. This is where most teams start to show cracks in their defense so stay focused.

Reaper doesn’t know when enough is enough so it’s time for him to learn. You can use the same strategy as before, but if you do make sure to allow Ana and McCree to farm the zomnics in order for them to have their ultimates up (or at least close to up) before the final fight. You can also attempt to burst Reaper down using regular fire (and usage of sleep darts and flashbangs in case he starts to ult) although the second option is obviously a bit more difficult.

The Witch (Mercy), Dr. Junkenstein and his Monster 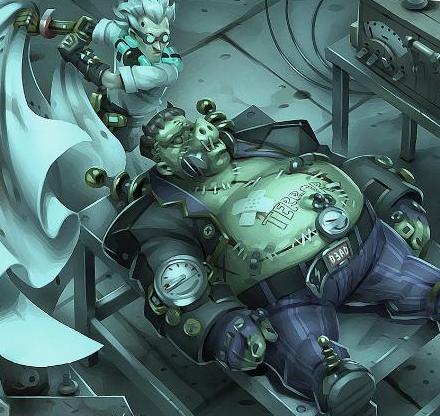 They’re less scary once you know how to beat ’em.

Once Mercy comes in Ana should sleep Roadhog so that he can’t cause any havoc for a while. Nano boost McCree so he can do his usual thing with his ultimate. Make sure you get everyone targeted as McCree. At the same time Soldier should use his ultimate to focus down Mercy (if she lives for too long you’ll never be able to kill Roadhog) and Hanzo should fire his ultimate at Junkrat.

After this initial stage of ultimate blasting you should find (if everyone did their job) that Mercy is either dead or close to it. Focus her down first if she’s still alive and then get to work on the other bosses, who should also be pretty low at this point. Make sure to (have someone) pay attention to the zomnics during this stage as well. If you’re all firing at Junkrat and a bunch of zomnics make it through to the door you’ll fail, so don’t disregard the critters.

If you manage to pull off the first phase of this last wave without any noteworthy errors (a missed McCree ult might as well warrant a restart at this point) you’ll find that, provided you’re not playing with complete newbies, it’s not super hard to complete Junkenstein’s Revenge.

This is a strategy that I found has worked for multiple players. Obviously there’ll be different ways to complete Junkenstein’s Revenge and everyone will have their preferred way, so feel free to share your strategies or tactics! Happy Halloween everyone!