Recently whilst I was browsing Reddit and talking to a friend about his absolutely ridiculous ingame sensitivity and subpar mouse, I got the idea of asking the people that play Overwatch (a current favorite of mine) what their sensitivity settings are and what overwatch gear they prefer to use. In the following article I will explain a bit about my findings. The survey was completed by about 750 users of /r/competitiveoverwatch so whilst it might not represent the general population of the game I definitely had some pretty interesting results. Please feel free to compare them with the settings of professional Overwatch players as well. Apparently there is a lot over overlap. 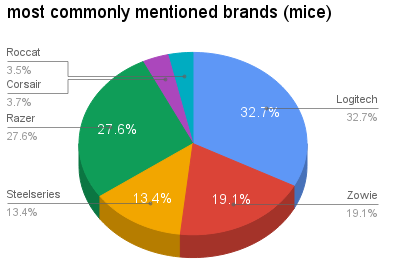 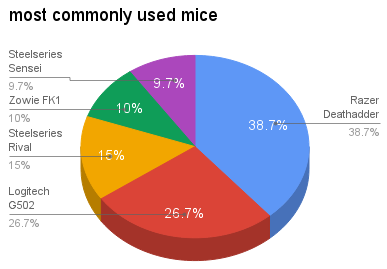 As you can see Razer and Logitech take the cake (or pie chart) considering mouse usage. Together they make up for 48% of the mice that you guys use. Zowie, Steelseries, Corsair, Roccat, CM Storm and Mionix were also frequently mentioned. About 11% use other mice or indicated that they use ‘a cheap mouse,’ ‘some windows mouse’ or even ‘a shitty 10$ mouse’ and that percentage is not included in the pie chart. 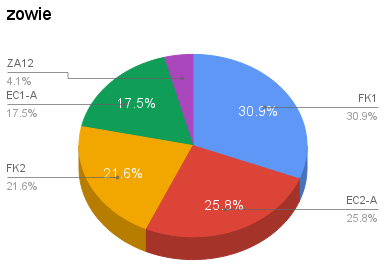 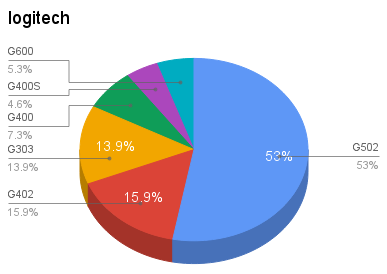 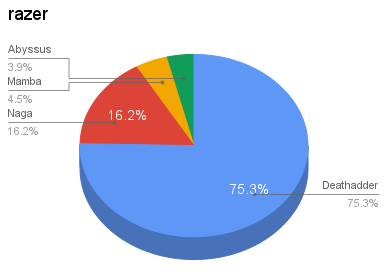 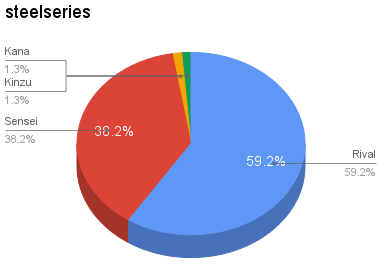 Razer products are pretty polarizing (you either hate them or love them it seems) but that didn’t stop them from having the most commonly used mouse by far with their Deathadder. Following the Razer Deathadder is the G502 by Logitech, which is a surprising choice in my opinion as it’s not really considered ideal for FPS gaming due to its weight. After these two whopping scores the closest follower is the Steelseries Rival (almost exclusively the model which is now called Rival 300) with almost half the users of the Logitech G502. Zowie users use a pretty wide variety of their mice, with the FK1, FK2, EC1-A and EC2-A splitting the pie in almost 4 equal pieces, though the EC1-A has to share its piece with the ZA12.

It seems that the most ‘popular’ mice (Logitech G502 and Razer Deathadder are mentioned really often when I was googling for ‘best gaming mice’) do get picked a lot by you guys. Zowie, which is a bit more a niche brand (though their popularity is certainly rising due to their mice being used by a whole host of professional players and because of their excellent quality) does take the third place for most used brand in overwatch gear.

I did not separate different version from each other. For example a ‘Deathadder Chroma’ would be listed as a Deathadder, same goes for ‘Deathadder 2013’ etc.

About 90 percent of the people that answered the survey had a gaming mouse or a high performing mouse in their setup but this trend does not continue towards keyboards. A little over 25% of the people that responded indicated they had ‘a regular keyboard’, ‘some cheap rubber dome keyboard’ or a variation on that. The people that did decide to buy a mechanical/gaming keyboard opted mostly for Corsair, Razer (again) and Logitech (again). Just under 5 percent indicated they played on a custom built keyboard and about the same percentage of respondents indicate that they play the game mainly on their laptop. It’s clearly indicated that a high end keyboard is less important than a high end mouse for playing this game, according to the survey respondents. The people that do buy a specific keyboard almost exclusively opt for a mechanical keyboard. 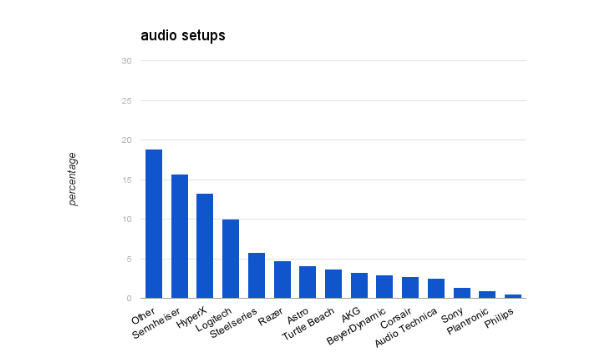 As we can see audio is slightly more important to you guys than keyboards. Around 19% of respondents indicated that they used something less than ideal (‘SHIT and SHIT’ comes to mind as a response for example) or generic earbuds or headphones. People that did want to invest in their audio seem to go for quality straight away, with Sennheiser being used (either the gaming headsets or Sennheiser headphones in combination with, for example, a modmic) by just under 16% of respondents. They’re followed by HyperX users with Cloud I and II’s represented in about equal numbers. Widely lauded as being the absolute best ‘budget’ gaming headsets they are the second most popular choice for overwatch gear. Logitech is up next (mostly G430 and G230) and then a pretty steep dropoff puts all the other brands at about the same level of usage. The audio department is the only department where Razer does not land itself a top 3 spot in our overwatch gear survey.

Moving on then to your settings. Of all the responses that were recorded it seems like lots of people like a low dpi on their mouse, 65% sets their dpi at 800 or lower, with 1600 also being a favorite. Sensitivities aren’t all that crazy either, with 84% of people playing with a sensitivity of 12 or lower.
All of that doesn’t mean a whole lot if you don’t combine dpi and sensitivity though so I did just that and came to the conclusion that 58% of respondents use a combination of 800 dpi or lower and a sensitivity of 10 or lower. 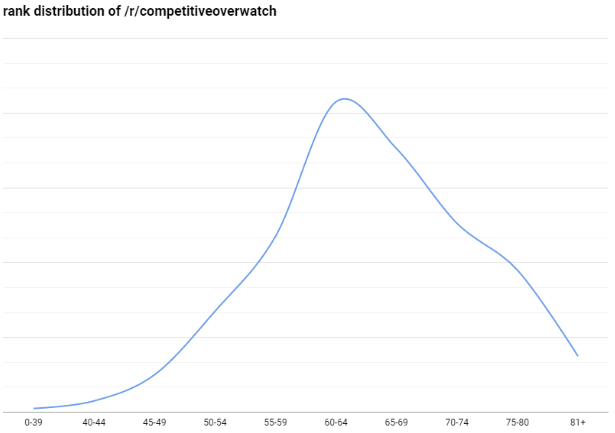 As to be expected of a forum dedicated to playing a game competitively most respondents seemed to be ranked rather high. If we take 60 as a high rank (which is basically what Blizzard themselves have said in one of their developer update videos) then we can see that 52% of respondents are ranked above that. Take that down a notch and a whopping 88% had a season high rank of 55 or above. Way to go people! One poor soul said he was ranked under level 29 and only one other has ranked between 30 and 39 in the overwatch gear survey.

So in conclusion; if we are to believe /r/competitiveoverwatch; invest in a gaming mouse with a good sensor, buy a sweet mechanical keyboard only if you feel like you want it and if you decide to buy a headset or headphones then make sure you’re going for quality. Then when you’re ingame don’t have your sensitivity too high and you’ll be in the top 6% of Overwatch players (which is rank 60 and above, according to Kaplan) in no time!

As a bonus; here’s another pie chart on what mouse grip is used the most.

Of course, results are to be taken with a grain of salt. Around 700 people replied to the survey and of course there is no way to verify whether or not people were actually the rank that they said they were. It is interesting to see though that most of the choices do line up with the overwatch gear of esports pros.

This is a guest post by our good friend Problemen. You can find his twitter account here.
He needs followers just about as much as we do 🙂