Ahh, the Zowie EC. Ever since the first iteration of this mouse got released way back in 2010 (it was co-developed by Emil ‘HeatoN’ Christensen) the EC has been steadily carving out a reputation as one of the best gaming mice out there. It quickly shot up to be the de facto standard gaming mouse for Counter-Strike professionals (a position that it still holds today) and also made significant waves in other games. One of the most lauded features of the EC series is the amazing shape and as such it’s no surprise that this has remained unchanged over the many different iterations that have been released over the years.

Over the past years Zowie have released a lot of versions of this mouse, so some people understandably have some difficulty seeing the forest for the trees. That’s where we come in. We go all the way back to 2015 (when the EC2-A and EC1-A were first released) and take a look at the differences between Zowie EC versions. 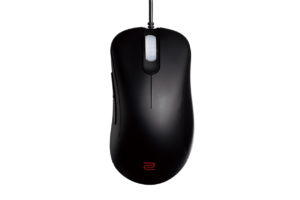 This is the oldest version of the EC that’s still in active use to this day, and ‘active use’ really is the right way to describe it as it still is one of the most used mice in the CS:GO pro scene. Just like with other Zowie mice you get to choose between different sizes; namely the EC1-A is the larger one, with the EC2-A being the smaller version.

This version has a matte coating and uses two large mouse feet at the bottom of the mouse for gliding. One way to spot an EC1-A or EC2-A in the wild is by looking at the scroll wheel: the 2015 EC version has a mouse wheel that lights up (the color depends on what DPI setting the user went for) and this was the last version to have any sort of visible RGB element to the exterior.

On the inside you’ll find the 3310 sensor which was cutting edge at the time but is obviously a bit of an older piece of kit these days. Modern gaming mice pretty much all feature a variant of the 3360 or 3389 sensor. The main difference between the 3310 and these newer ones is that the 3310 isn’t technically a flawless sensor. It is possible to get a 3310 to spin out, but only under very specific circumstances (by doing something known as a ’tilt slam’ whereby you rapidly place the mouse on your pad at an angle) which in practice means that this is not really a problem.

A ton of pro players are still using this older sensor and using the ECx-A to play at the biggest stages in the world, so if this spin out problem was widespread they would have obviously already switched. ‘Not really a problem’ or not: it’s obviously always better to minimize the odds of your gear pulling a fast one on you to the absolute minimum so if you’re interested in the EC series it’s recommended to look towards a newer model. 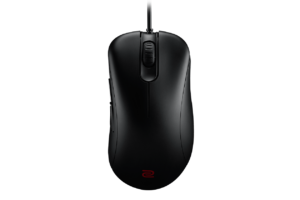 When flawless sensors started becoming the standard for gaming mice it was obvious that Zowie couldn’t let their major model fall behind so they released the EC1-B and EC2-B. This release featured a number of improvements and changes, but not all of those were received with equal amounts of praise. The sensor improvement (the 3310 was replaced by the 3360) was obvious, but Zowie had also chosen to change the coating and mouse feet. Instead of the regular two large feet we got four very small feet on the ECx-B series. This was done because user feedback indicated that the larger skates lost a bit of their initial smoothness after a lot of use, and to try and combat this they went for smaller feet in order to reduce the amount of skate surface that comes into contact with the mousepad.

The coating also got a makeover: instead of the usual matte coat the ECx-B got a mixture between matte and glossy. While the new feet received something of a lukewarm response (some people really loved the change while others preferred the older approach) the coating wasn’t met with a lot of praise to say the least. It was still very much usable but it didn’t quite feel as good as what they had on their earlier model.

This release also introduced the polling rate selector button at the bottom of the mouse which makes changing polling rates more user-friendly.

Not a flawless release

The ECx-B was, all things considered, still a great gaming mouse but its release was plagued by some whining. That whining didn’t come from the public; it came from the sensor. The earliest batches of this version had an issue where you could hear a high pitched noise coming from the sensor. This didn’t impact performance at all (the 3360 inside did what it had to do flawlessly) but it could get annoying to some users. This was fixed pretty quickly however, and after Zowie released a statement saying that they fixed this issue there haven’t been any new reports of coil whine. 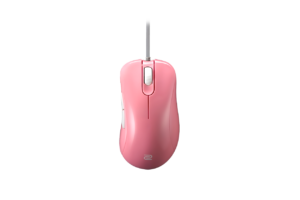 Click the image to check our EC2-B Divina review!

Zowie are known to put performance over everything (which is why you will not find any outrageous logos or RGB lighting on their products) and they do have a pretty good track record of listening to their audience. When they came out with the Divina versions of the ECx-B series a lot of people initially thought that this was just a recolor of the existing ECx-B series, but that’s not entirely true.

Obviously there’s a difference in coating (the Divina edition has a glossy coating as opposed to the hybrid of the earlier version) but Zowie also went back to the more liked two feet setup with this special edition release. This alone is reason enough to call it an upgrade over the ECx-B series for most people, but Zowie also moved the little ‘product information sticker’ (with the serial number, model name, and so on on it) to a little tab at the end of the cable in order to eliminate any chance of said sticker (which previously sat on the bottom the mouse) interfering with the glide. It’s a small change, but it does show how they pay attention to detail.

For women in eSports

In case you’re thinking ‘what’s up with the colors’ you aren’t the only one. Baby blue and pink aren’t exactly colors that pop into mind when you think about gaming mice, but there is a reason that these colors were chosen. The Divina project aims to support women in eSports and provide them with equal opportunities to compete at the highest levels. Divina products are only officially sold through selected retailers who support the ideas and values that the Divina project stands for.

Doing away with the (rather confusing) A and B naming scheme Zowie has decided to bundle all that they’ve learned over the past few years and combine it in this newest release. Gone are the small feet and hybrid coating: the EC goes back to the two large feet and matte coating of days past. Because of the overwhelmingly positive feedback that they got on the Divina versions of the EC it was decided that two large feet is the way to go, so now we’ve got what should be the best version yet.

All you could want?

The EC has everything that makes the EC series such a loved mouse without trying to reinvent the wheel, and a lot of people will be excited by this alone. There are now two completely equal options for people interested in the EC; a glossy version (the Divina series) and a matte version (the regular EC series) so this is a logical release if you look at it that way. 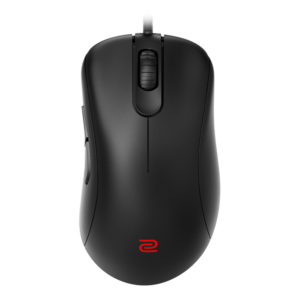 In the middle of 2021, Zowie announced the EC3-C. This meant not only that the EC family would be getting a new member in the form of the shorter EC3, but the ‘C’ edition also brings a number of improvements to the EC line that make their most famous mouse family more up to date with modern standards for gaming mice.

The C versions of the EC have seen their weight reduced, have a more flexible paracord-like cable (as well as the angled cable at the point where it exits the mouse) and now have a 24-step scroll wheel as opposed to the 16-step wheel found on earlier versions of the EC. These changes help bring the EC mice more in line with current mouse trends and technologies while still maintaining the original aspects that makes them so popular in the first place.

Fans had been asking for changes like these to Zowie’s mice for a while now, and the most recent EC version is a fresh take on one of the most successful tactical shooter mice to ever exist. If you’re looking for a brand new EC, the C version should be the one to be on the lookout for. 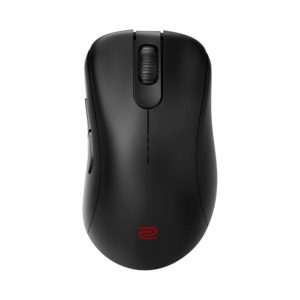 The year 2022 was the year where wireless mice finally became pretty much the norm. As such, people started wondering when Zowie would come up with their own wireless mice, and when footage emerged of pro players using wireless Zowie mice over the summer, the mouse community knew that the official release of the wireless versions wouldn’t be that far off.

The ECx-CW has everything that you’d expect from a Zowie mouse, but in a wireless package. When it comes to the overall feel and specs there isn’t much difference between the ECx-C mice (aside from the very obvious fact that one is wireless and the other is not) so if you don’t really care for the wireless aspect you could go for an ECx-C instead of the wireless version.

Zowie’s first wireless mouse came with some delay because the company wanted to make sure that it would work without any hiccups at all since the brand is very much focused on competitive performance without any distractions. For that reason, the CW mice come with an ‘enhanced wireless receiver’ which is meant to ensure a completely stable connection at all times without interference, even if you’re playing at a LAN tournament or what have you where there’s tons of wireless equipment lying around. The enhanced receiver also functions as a dock to charge your mouse with.

Conclusion on the differences between Zowie EC versions

It’s obvious that the EC line has been through a lot of changes over the past few years, but if you’re interested in an EC mouse these days we’d recommend a C version, or the CW version if you want to go wireless. The other versions are still for sale, and the EC2/EC1 would still be a great option, but the modern touches (lighter cable, lighter weight, …) of the C versions make those a worthy upgrade. You can also consider the ECx-B if you absolutely prefer the smaller feet but there is no real reason why you should be looking at an ECx-A if you’re interested in Zowie’s bestseller.

Hopefully this has helped, but if you have any questions feel free to reach out!