Zowie is one of those brands that might not ring a bell if you’re not all that into competitive gaming but it’s one of the most loved brands among (professional) competitive gamers. Their no-nonsense approach to gaming peripherals makes them the weapon of choice for many top level competitors across a variety of games even to this day. It’s no surprise, then, that a lot of people want to try out a Zowie mouse for themselves, and that’s where things can become difficult. There are a lot of Zowie models on the market, and the fact that there are multiple iterations of each model on the market at any given time doesn’t exactly make it easier to see the forest for the trees.

In this article we’ll cover all of the currently available Zowie symmetrical mice (click here for our article on Zowie’s ergonomic EC series) as well as a bit about their history and explain their differences so that you can learn a little more about these mice and make an informed purchase should you want one. 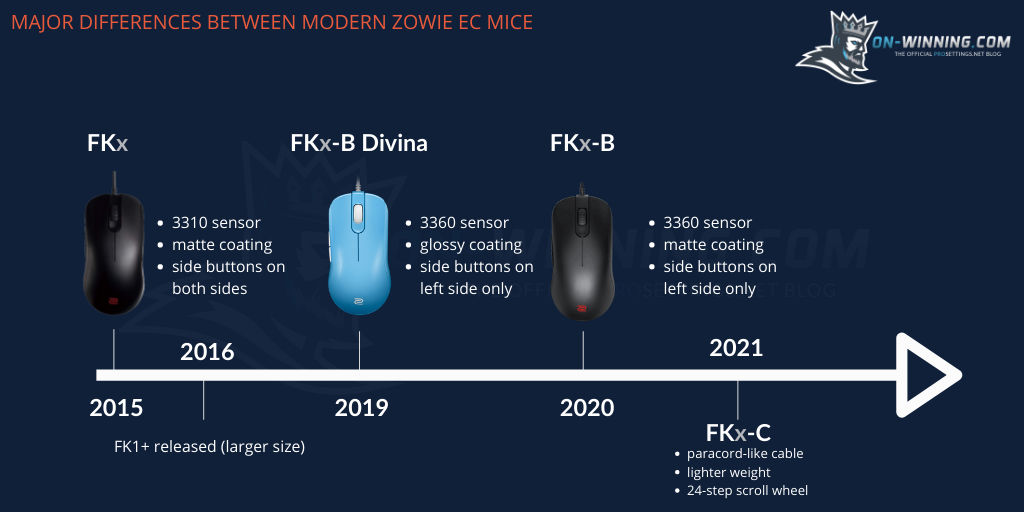 The Zowie FK line is arguably the second most famous line of Zowie mice (behind the EC series) and the most popular of the Zowie symmetrical mice. It first hit the market back in 2013 as the ‘Zowie FK,’ a mouse that was born from a collaboration between the brand and Filip “NEO” Kubski, a Counter-Strike legend.

Even though the FK line went through a lot of iterations in the years after its release the FK1 and FK2 (the ones with the red Zowie logo and black scroll wheel) are where we’ll start off since the older versions aren’t available anymore and aren’t used a lot of pros these days either.

The 2015 FK1 and FK2 mice have a 3310 sensor, along with side buttons on both sides of the mouse. With a matte coating on the shell these are subtle looking mice, true to Zowie’s design standards. The FK2 is the smallest version of these two mice, but otherwise they’re exactly the same. These are still being used today but the fact that these older FKs have a 3310 in them (which technically isn’t a flawless sensor) makes it so that we see these being used less often as time goes by.

Not long after the FK1 and FK2 were released the FK1+ saw the light of day. This is the largest version of Zowie’s FK mouse. Aside from the size difference it’s exactly the same as its smaller siblings.

By the time 2019 came around, a lot of people were anxiously awaiting a version of the beloved FK with a flawless sensor. The 3310 is a perfectly capable sensor (and pros today still use mice with a 3310 in them, though they are in the minority) but it’s technically not a flawless one since it can spin out.

Zowie thus came out with an updated FK line containing a 3360 sensor, but initially they only released their updated mice as part of their Divina initiative, meaning that these updated FKs were only available with a glossy coating in either baby blue or bright pink. Another noteworthy change was the removal of the right side buttons. This was done because not enough people were using those to justify the weight increase, along with the fact that these unused buttons could get in the way.

Aside from these major differences there were some other minor improvements made, namely to the feeling of the buttons and the way the cable exits the shell.

Click here to see our review of the FK2-B Divina.

Click here to see our review of the FK2-B.

With the release of the C series of mice, Zowie has brought some modern updates to their products. The most notable changes have been made to the weight (all C models weigh less), the cable (this is now a paracord-style cable), and the mouse wheel (which now has 24 steps instead of the old 16 steps).

The FK line sports a flat and ambidextrous design. It’s often touted as an ideal mouse for claw grippers and fingertip grippers alike but its low hump makes it particularly effective for fingertip grippers or for people with a hybrid grip who don’t prefer a lot of palm-filling contact. Those who do a pure claw grip or prefer more palm contact would do well to look at some other Zowie symmetrical mice.

The FK line is available in three different sizes. From small to large: FK2, FK1, FK1+. 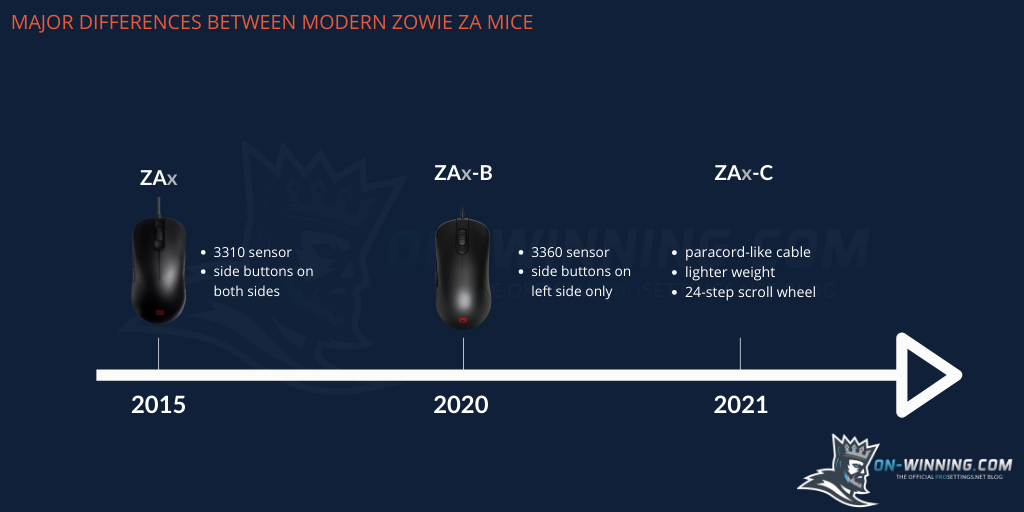 The Zowie ZA line has always flown under the radar a bit. It came out after the FK line and has never really managed to become as widely loved as its older sibling, and even with the release of the S line (which means that the ZA isn’t the newest kid on the block) it still seems to be the least famous member of the Zowie family. It’s also the only line of Zowie mice that did not get a Divina model, which could mean that it’s also the line that sells the least amount of mice, but of course we’re just theorizing here.

Back in 2015 the Zowie ZA saw the light as the newest member of the Zowie family. Just like the other Zowie symmetrical mice from that era the 2015 ZAs have a 3310 sensor, side buttons on both sides, and a matte coating.

The ZA line immediately came out in three different sizes: the Zowie ZA13 is the smallest one, with the ZA12 being the middle child and the ZA11 the largest of them all.

Since the ZA mice skipped the Divina update we didn’t see a ZA mouse with an updated 3360 sensor until five years after the initial release of the line. The ZA-B series has a 3360 sensor, and has seen improvements to the main buttons and scroll wheel, as well as the now standard (for Zowie mice) angled cable joint to prevent cable drag. One more large change is the removal of the side buttons on the right side.

Click here to see our review of the ZA13-B.

Despite being the final silo of mice to be released in the ‘C form’, the ZA line is also getting the C treatment. This means that the mice will weigh less, have a 24-step scroll wheel, and will have a paracord-style cable.

The ZA line has an ambidextrous design with a noticeably larger hump than the FK line. This makes it great for people who utilize a claw grip, or for people who have a hybrid grip and prefer a filled-in palm. Pure palm grippers can also see this mouse as an option, as long as their hands aren’t too big.

This line is available in three different sizes. 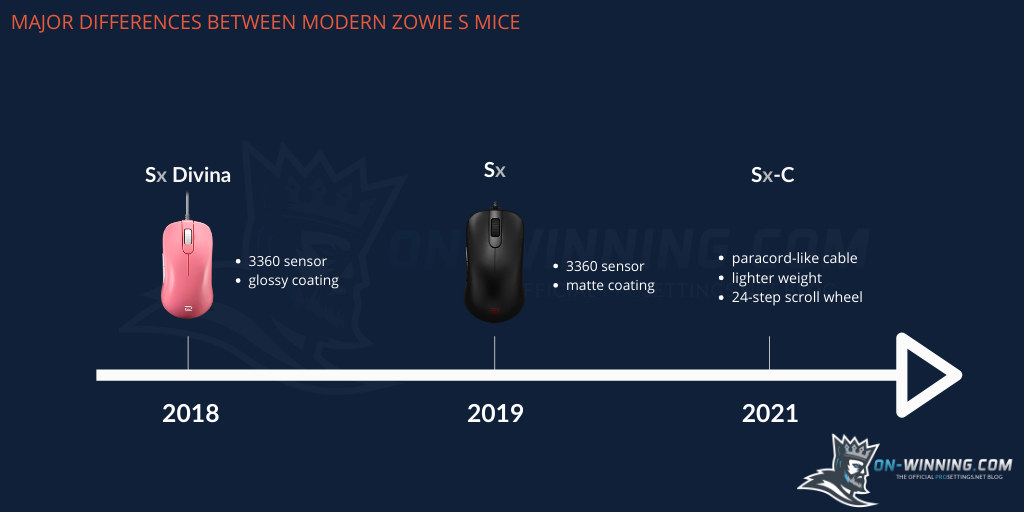 The Zowie S line is the newest family of mice to be released by Zowie. This one stands out a bit because it was initially only available as a Divina edition mouse (meaning that it released with a glossy pink or blue coating first) as opposed to being launched in the regular black Zowie coating.

When Zowie unveiled their Divina project they also introduced a brand new shape in the form of the S. Of course it was widely assumed that it would also get a regular black version but initially you could only get this Divina version of the S. It has a 3360 sensor, side buttons only on the left side, and of course a glossy coating.

Click here to see our review of the S2 Divina.

With the S being released to favorable reviews it didn’t take long for Zowie to drop the regular black edition. This one isn’t very different from the Divina edition at all, with the only big difference being the coating.

Click here to see our review of the S2.

Just like all other Zowie mice, the S line also got the ‘C makeover’. The S1-C and S2-C both weigh less than their older siblings, and come with a 24-step scroll wheel (as opposed to a 16-step wheel) and a paracord-style cable.

The Zowie S was initially compared to the FK a lot (because of the fact that the FK is the most popular symmetrical Zowie mouse) but it in fact feels very different. The S has a more pronounced hump, much like the ZA series, but is an overall shorter mouse. It’s also a bit higher at the front than other Zowie symmetrical designs, making it feel a bit more compact than the longer feeling FK and ZA lines.

You can get the S in two different sizes: the S2 (small) and the S1 (medium). 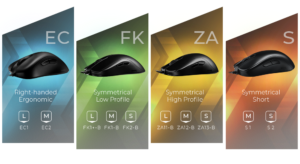 The image above (made by Zowie) explains it pretty well. Zowie’s main goal is to provide a shape and size for everyone out there, without one line of mice being superior to another line. It took them a while to get to this point but as of this article being published all modern Zowie mice have the exact same specifications aside from their shape. That of course doesn’t mean that there aren’t any other differences (different shell designs can make button clicks feel different, for example) but generally speaking you only have to worry about the shape if you’re considering a Zowie mouse.

What you like (or don’t like) is down to personal preference, so this is just a guideline (feel free to read our article on how to choose a gaming mouse) but generally speaking we’d consider the following:

The FK seems to be perfect for claw-dominant grippers who don’t prefer a lot of palm contact, or for players with a fingertip grip.

The ZA line could be ideal for claw-dominant grippers who want some palm contact or for palm-dominant players with smaller hands. This is a symmetrical mouse with a higher hump than the FK but it’s still pretty long feeling in the hand though. If you don’t prefer that there’s always the S.

The S has a shorter overall build than the other Zowie symmetrical mice, making it ideal for players who prefer shorter/smaller feeling mice with a higher hump, and thus a great option for claw-dominant grippers or palm-dominant players with a smaller hand. Due to the shorter overall size it’s also a better option than the ZA for people who fingertip grip their mouse.

Again: bear in mind that this is all theory. Everyone has different preferences and needs, so this is a rough guideline to help you make a decision. None of this is set in stone.

Hopefully you found this breakdown to be useful!