Frost Mages have always been one of the best casters in World of Warcraft. From time to time the class has proven itself to be very powerful and also really impactful. Throughout the expansions and the Blizzcon tournaments we got to see a lot of Mages and their flame hasn’t gone out yet. In the Warlords of Draenor expansion, Mages have maintained their strength. 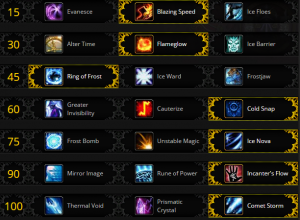 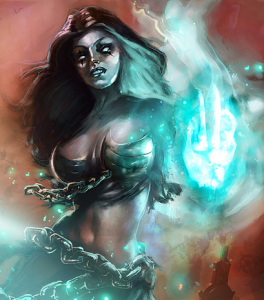 Before even thinking about playing a Frost Mage you need to set up your character. In this section we will start with the talents. You take Blazing Speed because you can either chase or kite really well with it. The 150% movement speed increase for 1.5 seconds often helps you get away from melees after they use their gap closer abilities such as Charge, Wild Charge or Death Grip. The fact that Evanesce replaces Ice Block makes it really bad. Ice Floes are really weak, being able to cast frostbolts while moving isn’t that good because your burst damage is instant anyway. The next talent you want to take is Flameglow. It reduces the physical damage you take massively.

Alter time is not that good because of the long cooldown. The fact that it doesen’t save your buffs anymore also just makes it less valuable than the other two talents.  The only situation where Alter Time could be useful is when you play as double DPS in 2v2. You usually don’t take Ice Barrier because it is easily dispelled by a lot of classes. Flameglow on the other hand is really consistent and reliable.

You get Ring of Frost if you play against druids, because they can shapeshift Polymorph. Ring of Frost has a lot of potential since you could CC multiple people. Ice Ward helps kiting melee dps classes. If you prefer additional CC outside of Deep Freeze and Polymorph, Frostjaw should be your choice. In general I recommend taking either Ring of Frost or Frostjaw. You should pick Ring of Frost against druids in arena situations and in Battlegrounds. Outside of that always take Frostjaw. The next 4 talent choices Cold Snap, Ice Nova, Incanter’s Flow and Comet Storm are just straight up better than the other ones. Don’t bother taking anything else.

The only real choice here is which Ice Block glyph you want to use, both are really good and they are similarly useful. Test both and decide which one suits your play style best.

On top of following this Stat priority you should look up top rated Mages in 3v3 on ladder. This will assure a ideal Custimization.

and you get a chance of getting Fingers of Frost

procs. So basically you spam Frostbolts until you get FoF/Brain Freeze procs, then you press Frostfire Bolt

. If you have both proccs prioritize Frostfire Bolt since you want to hold the Icelance proccs for your burst.

If you want to maximize your burst, you want to build 5 icicles with  Frostbolts. After that you press Icy Veins

, in that order. Icy Veins is optional since it has a 3 minute cooldown and it can be dispelled. If you want to maximize your damage you can even line it up with your proc trinket. You could also start the rotation with 1 stack of Incanter’s flow, using your Ice Nova'(s) on 5 stacks. If you need extra damage after that you can cast Freeze

You are able to dispel Warlock Agony

to get off Fear Ward

Try to get a feel for your Incanter’s Flow

to use your Burst Peak with high stacks. You should aim for 5 stacks on Ice Nova

, since it is your hardest hitting ability.

Practice the damage rotations in Battlegrounds until you don’t have to think about it.

Frost Mages are really good in WoD. Their spammable CC

is insane. The fact that Frost Mages are the only ones besides Boomkin’s who can kill people in a few seconds, makes them that much more fearsome.