The Xim4 is a gaming peripheral that allows you to use a mouse and keyboard on your Xbox One, Xbox 360, PS3 and PS4. It has been a staple and the best keyboard and mouse adapter for consoles for quite a while. Now there is a new rival to the XIM4: The TAC PRO. Sony has just announced it, and with an upcoming release date, we have to take a look at both to decide whether its worth a buy.

Now on how to compare the two: As you might know, we are mostly interested in competitive gaming gear. Which means we are looking for flawless sensors, comfort, quick reaction times etc. This also means we don’t care about the price much. So please keep this in mind. More on that later.

In terms of competitiveness, using a mouse and keyboard has significant advantages over traditional PS4 and Xbox controllers. So much so apparently, that PC Gamers ‘destroyed’ console gamers in tests when paired against each other. I, personally, don’t like to play at a disadvantage. So I wanted to get an adapter as soon as possible. After some research we’ve concluded these two options are the best console mouse and keyboard solutions right now. So let’s get started on comparing them. 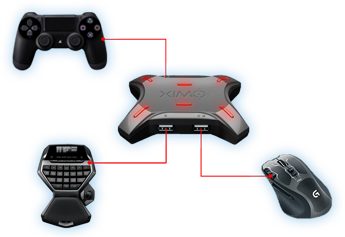 Adapter configuration for mouse and keyboard

The Xim 4 keyboard and controller adapter is the forth iteration of the popular XIM devices and has been revised and refined with every version. With it, you are able to use a variety of mice and keyboards on your consoles. See here for a list of compatible devices. It also has basically no input lag which is a major plus.

You can update the settings of the Xim4 through a convenient Android app. In there you can change specific settings like the mouse speed (sensitivity) or keybindings. It is surprisingly convenient although daunting for the casual user.

As you might now we track the gaming gear of competitive players in a variety of games. E.g.: CS:GO and Overwatch. I think you can’t really go wrong when chosing the same mice and keyboards as professional players.

So for the list of mice that pro players are using and that are compatible with the Xim4:
Finalmouse, Logitech G303, Razer DeathAdder, SteelSeries Rival, Zowie EC1 and Zowie EC2.

That means there is a variety of compatible mice and keyboards available that you can use.

The XIM4 is still a fantastic product and the ability to use it on both the PS4 and Xbox is just a major upside as well. The option to use the same devices you use on your PC is incredibly important, because most of us are so used to our gear that we don’t want to miss it. And with basically no impact on input lag it is a fantastic choice. With it though, you do need to buy the adapter AND the peripherals separately. Our second option comes as an everything-included package and can be a great deal for the money-conscious. 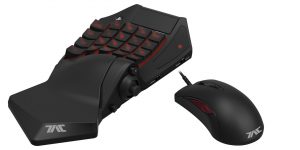 The TAC PRO mouse and keyboard

HORI has been making a great variety of products for competitive console games for a while now. A significant margin of professional Street Fighter players use their fight sticks. So I have no doubt in the quality of the product.

The TAC PRO is compatible with both the PS3 and PS4 but also the PC. All the buttons can be configured and calibrated. The mouse is an optical 3200 dpi mouse. Although the high dpi count might not be important, we are happy about it being an optical instead of a laser mouse.

The keyboard is not a fully functioning keyboard but rather a keypad with buttons. Much like the Razer Orbweaver.

The TAC PRO is not an adapter but fully functional and compatible with these consoles out of the box. No hassle with extra peripherals or complicated setups in Android apps. The major downside is that the gear itself is not proven yet and will probably never be adapted by professional players.

Obviously, in their first iteration, HORI will not be able to provide a product that can hang with established mice and keyboards from competitors like Zowie, Razer or SteelSeries. But the TAC PRO can provide a great option for price-conscious players who want the mice and keyboard experience on their PS4 or XBOX One. With a price clocking in at about the same rate as the XIM4 adapter there is significant savings to be made.

For the competitively minded players, this is an easy choice. We want to hang with the pros – so we use the same gear as the pros. And for the time being the only option here is the Xim4. It has a wide variety of compatible mice and keyboards and although the setup through an android app can be cumbersome and the price is incredibly high for an adapter, there is really no choice.

The TAC PRO however is a great choice for console players who don’t have high-tier gaming peripherals already. It’s a great choice in terms of expected production quality from HORI but also in terms of price. It is easy to set up and provides a very similar experience to its rival the XIM4.

All in all, its hard to go wrong with the TAC PRO but we prefer the XIM4.