Aim Training Software: Is It Worth It?

Aiming is an integral part of any FPS player’s skill set, and games such as CS:GO have had dedicated aim maps in the Community Workshop for years now. Lately, games such as Aim Hero and KovaaK’s FPS Aim Trainer have been popping up, featuring heavily customizable scenarios for players to hone their aiming skills. After all you can have all the best gear, the fastest connection and a beast of a PC, but if you’re not able to hit the broad side of a barn you’re not gonna be a good FPS player. That’s supposedly where these programs come in. Are they worth the money or are you better off practicing the game itself? I take a look at KovaaK’s FPS Aim Trainer in an attempt to find out.

Disclaimer: I have looked at (and purchased) multiple programs, though I will be focusing on KovaaK’s FPS Aim Trainer for this article since it seems to offer the most functionality and customization. 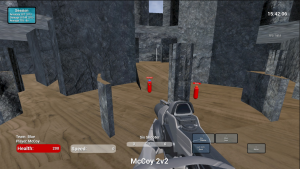 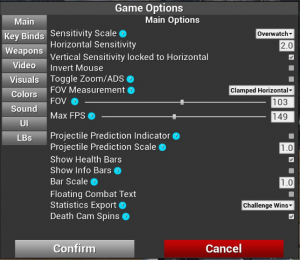 Once you launch the game you configure it to match your settings for the game you want to train for. I have been talking to developer Garrett “KovaaK” Krutilla and he said that he ‘can guarantee that the sensitivity and FOV are completely accurate to the games included in the options menu.’

Once you set up your settings to emulate a certain game (I used Overwatch throughout most of my testing period) everything moves exactly the same as in that particular game. That’s obviously of vital importance, since you don’t want to be training your muscle memory to respond to a different sensitivity or game.

After configuring your FOV, FPS, and all that jazz you can select any number of scenarios to train. The cool thing about FPS Aim Trainer is that it has Steam Workshop support, which means that users can also create and upload their own scenarios. This means that there are far more scenarios to choose from when compared to other aim training games. Movement speed, jump height, and all of those things can all be copied from the games you’re training for.

If you are not very tech savvy or don’t have the time or patience to create your own scenario you can just download one of the 100+ user made scenarios with a single click.

Aim trainer vs playing the game 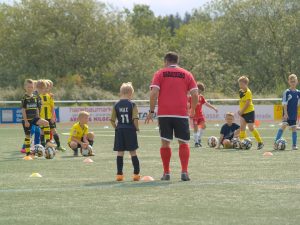 Practicing fundamental aspects of your game over and over in a controlled environment is a tried and true method in almost every sport.

Something that’s often heard when people are talking about these aim training programs is ‘why waste time with that shit when you can just play the game itself?’ That’s pretty valid criticism. The vast majority of legendary FPS players got their insane skills long before aim training software was a thing, and you can always create your own training scenarios in game, either with bots or friends. Bots often move very predictably though, and friends don’t always want to be your aim target.

I find that it’s best to compare the utility of these pieces of software to a training or warm up session in actual sports. If you play 12 matches of football every day (let’s just say for argument’s sake that this is humanly possible) you’ll definitely improve most aspects of your game after a couple of days, but you won’t be able to focus on a particular weakness of your game. If your passing is garbage it’s probably best to spend a couple of training sessions focusing on passing as opposed to botching the few opportunities you get to pass in an actual game, for example.

As Krutilla puts it ‘the biggest benefit is the ability to focus on your personal weaknesses. If you identify that your tracking (or flicking, or projectile aim) needs work, you can load up a relevant scenario and grind to your heart’s desire without the pressure of playing a multiplayer game.’

You can definitely also work on your weaknesses in an actual game, but there’s a significant amount of downtime involved with that method, since you’re queuing up, respawning, waiting for matches to start, and so on. On top of that you can’t really focus on a very specific aspect of your gameplay. If one of your main issues is sniping people through the doors on Dust 2 you won’t get too many opportunities to practice on that part of your game before your teammates stop dropping you the AWP.

Even if every aspect of your aim is already perfect (which probably isn’t the case, unless you’re Fleta, s1mple or one of those people) you still need to warm up before a serious session in order to get your hands and mind ready for the game. Software like this can be very handy for that purpose as well. 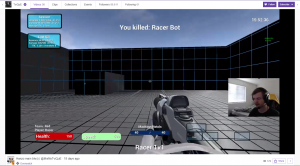 Let me get one thing out of the way: buying an aim training program will not catapult you to the Overwatch League stage within a few weeks (unless you take a tour there or whatever). A great FPS player (in any game) relies on way more than aim alone. You’ll need good game sense, timing, communication, and so much more to become a truly great player. You could be the Zeus of the Aim God Valhalla, if you keep running into the enemy team 1 v 5 without any backup you will be absolutely useless.

That being said; aim is undoubtedly a very important skill for an FPS player. It’s more important in some games than it is in others but FPS still stands for First Person Shooter so if you’re absolutely unable to actually shoot stuff you won’t be winning many matches. If your aim isn’t up to par for your rank you can, depending on the game, definitely climb a few ranks if you really focus and train on the weak parts of your aim. It’s never a good idea to focus your training on aim alone, but it’s also never a bad idea to actually practice and hone your aim outside of game scenarios.

As an example: I have good hitscan aim, but I’m not good at hitting airborne Pharahs as Zenyatta. Training that in an actual game isn’t a good idea, since situations where I come up against a Pharah without any major distractions (healing teammates, tracking ults, and so on) are very rare. 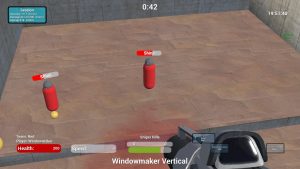 Being able to just download a scenario where there’s a bunch of Pharah bots flying around and I can get used to the projectile speed, Y axis aim, and so on until I can confidently hit Pharah is super useful and it’s where software such as FPS Aim Trainer really shines. You’re training on your own terms, in a controlled environment, for as long or as short as you want to, using the same movement and sensitivity as you use ingame. That can be super valuable.

Another thing that I feel I have to mention is that the bots in FPS Aim Trainer move in a proper unpredictable pattern. Most bots in games or some aim training programs move, well… like bots. The training dummies in KovaaK’s program don’t move exactly like humans would in a game, but they do move in an unpredictable and human-like way when trying to dodge shots, which is something that I honestly found very impressive. This excellently coded bot behavior makes it way more useful as a tool for preparing for real game scenarios.

So do I think you can get better by downloading an aim training program? Yes, I definitely think you can. This kind of software will have more of an immediate effect on newer players or players struggling with their aim, but experienced players can still find use out of this software. But again: be wary that aim alone isn’t enough to make it to the top.

Big hit or does it miss the mark? 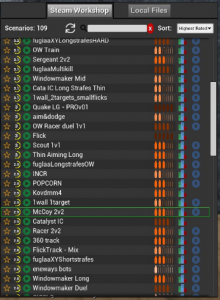 With over 100 scenarios to choose from you’re not going to be running out of options anytime soon.

So where exactly do these things land on the usefulness scale? I’d say that it mostly depends on what you expect from it. In order to truly become a better player quickly you’ll need to do stuff such as reviewing your own VODs or at the very least reflecting upon your own mistakes during an actual game, for example. No software (except cheats, but those are for losers) will suddenly make you rise up the ranks if you don’t have the right mindset to improve. Aim is only a small part of what makes a great player great but I do think that aim training software can have its place in the competitive gaming scene.

For pros or people who already have (great) aim they can be excellent tools to warm up or maintain those skills, or to touch up on the little weaknesses in the aim department. Aside from that it’s also just fun (not as fun as playing a real game though) to try and break your own high score or to challenge your friends to beat yours.

Beginners and established gamers alike can also use this software as an actual training tool thanks to the 1:1 sensitivity and ingame movement conversion.

The point here is: if you use this kind of software in a clever way and utilize it to compliment your already existing schedule of training or playing it can definitely help you become a more consistent player or help you in your warm up routine. As with most stuff, ‘practice, practice, practice‘ is one of the best pieces of advice when it comes to aim, and I’m of the opinion that software can definitely help you with that.

As mentioned I had a brief conversation with Garrett ‘KovaaK’ Krutilla in light of this article. He mentioned that if you’re interested in FPS Aim Trainer or already own it and want some help with creating custom scenarios or anything like that you can always visit his Discord channel.