A good player (in any sport) doesn’t just coast by on mechanical skills. The truly great players also have an elite mentality which helps them grind out tough games. It makes sense, too. If you hang your head in shame after the first sign of opposition or you get blinded by rage when you get styled on your performance will suffer from it. Remaining calm and collected and having that elite mentality can also help you in esports, so read our guide to find out more on how you can avoid tilt.

From Wikipedia: “Tilt is a poker term for a state of mental or emotional confusion or frustration in which a player adopts a less than optimal strategy, usually resulting in the player becoming over-aggressive.” 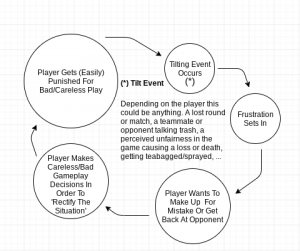 The Vicious Circle Of Tilt

So the term comes from the poker world, but it’s now widely used in gaming as well. In short: tilt = anger/frustration. It doesn’t need to be said that it’s best to avoid tilting. A player who is tilting will often be playing with tunnel vision, desperately trying to get back at ‘that one annoying enemy’ or trying to make up for past mistakes by making bold, aggressive plays which often do not work out. When these suboptimal plays result in death/loss or what have you that’s often the source of even more frustration, putting the player in a vicious cycle of tilt.

Tilt isn’t some anger management issue which only affects raging children. No game or player is ever perfect so every (somewhat competitive) player will be faced with difficult or unforeseen situations throughout their playing career. Therefore it’s important for players from all levels to learn how to adapt to these situations, and if at all possible to avoid tilt entirely.

How To Avoid Tilt

Unless you’re a Buddhist zen master you will be faced with situations where you’re getting (incredibly) annoyed. You can only sit through so many games where there’s a blatant thrower on your team, for example. As such, avoiding tilt completely just isn’t possible. At least not when you’re playing multiple (competitive) games every day. There are ways to mitigate the damage, though.

An often heard piece of advice is to limit your losses in a row to a certain amount. You could, for example, tell yourself that if you lose two competitive games in a row you’re done for the night, or you at least take a break. You might not think you’re tilting but it’s not uncommon at all to hear players say ‘just one more game so I at least get my rank back,’ for example. That all sounds okay, but lose that last game and you’re now two (or more) wins away from your rank. This can cause you to want to go aggressive and ‘make some plays’, when in reality you’re just feeding.

Some people deal with losses better than others, so the threshold to take a break will vary between players, but in general it’s not a good idea to try and battle your way out of a losing streak. Take a break, relax, clear your mind, and get back at it with renewed confidence.

Accept That Failing Is A Part Of Improving

No top player in the history of mankind has a completely flawless record. Cristiano Ronaldo and Leo Messi still miss chances you’d expect your mate Dave from Sunday League to score. The guys in Astralis still botch nades or drop the bomb in a silly spot. I could go on and on, but the fact of the matter is that perfection does not exist.

Everyone makes mistakes, regardless of how good they are and everyone has to take it up the chin sometimes. Failing and losing is a natural part of competing. The difference between great players and ‘merely’ good players is how they deal with drawbacks. Take a loss as a learning experience (reflect on what you could have done better in an honest way, for example) and use that to strengthen yourself as a player. If you somehow believe that you deserve a 100% win record and thus get livid with every loss you’re doing it wrong.

Understand That You Are The Only Constant Factor In Your Games

You can’t control others. Sure, you might be doing everything right while your team seems to be doing their very best to lose the game, but it doesn’t make sense to get angry over that. It’s obviously frustrating when you seem to be the only person with their monitor turned on, but getting riled up over that won’t magically make your teammates better. Watch some streams and you’ll notice that even the top players in the world have off days or get put on teams where nothing seems to work. That’s the nature of multiplayer gaming.

The only factor in all of your games that you can influence with 100% certainty is yourself. Make sure that you’re always in ‘optimal condition’ and that you don’t let external factors over which you have literally 0 influence impact your performance. 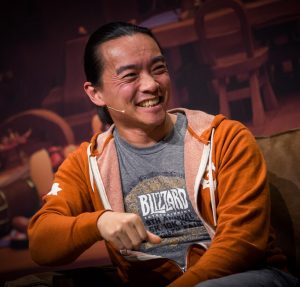 Photo by Helena Kristiansson for Blizzard

This will differ from player to player, but generally it’s not a good idea to play super serious competitive games when you’ve just had an absolutely horrifying 14 hour shift at work or something like that. Believe it or not, but playing games at a somewhat decent level in a serious way can be quite draining. If you’re already mentally empty or in a super bad mood it’s going to be way easier to be pushed over the edge, resulting in the dreaded tilt.

If you’re not feeling too hot when you finally end up at your PC it might be a good idea to play a more casual game(mode) instead of going super hard in a high stakes competitive environment.

Don’t Be A Jackass

This might not initially directly influence you; but don’t be a jackass to your teammates. If you initiate a vote to kick a player after that player lost a 1v4 in the first round you’re not only making a fool of yourself but you’re also inviting toxicity into the team. A frustrated, tilted teammate can quickly sour the mood of an entire team and a bickering, flaming team is the fastest way to another ‘L’ on your record. Try to be a positive factor for the team. You don’t have to overdo it, but a simple ‘nice try’ instead of ‘haha loser, uninstall’ is a world of difference, and being able to avoid tilt in your team is a valuable skill in and of itself.

You also need to be able to take criticism. If you get asked to maybe leave the sniping to another player your teammates usually don’t mean to say that you’re absolutely trash at the game and belong in the Wood Ranks. It could also be that your sniping isn’t really on point during that match and it’s better to leave it to someone who’s in better form at the moment. In short: be kind and gracious, both when giving criticism or praise and when receiving it.

Realize That Your Rank Is Just A Number 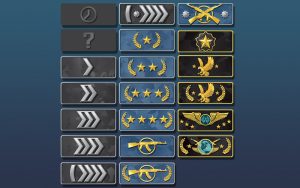 A lot of toxicity in ranked matchmaking comes from people being afraid of losing that precious symbol that comes with their rank. That’s all it is though; a symbol. You’re not going to get an extra discount at the grocery store for being Diamond instead of Silver and if you put your rank on your resume it’s most likely going straight in the trash. Literally no one cares about your rank, except for maybe you yourself. If you somehow lose a couple of ranks after a few days of bad luck you’re not instantly a worse player, you’re still you. Focus on improving yourself and your overall rank will improve over weeks, months, and years of play. Small fluctuations in your rank shouldn’t bother you.

Mute Trolls And Other Negative Influences

There are people who say it’s better to just wholesale mute voice comms or chat and to just never partake in it, but I strongly disagree. Nevertheless, there are always going to be people who are beyond help. If you feel like a certain player is spouting nothing but inane BS or only using voice comms to talk smack then by all means just mute that player and go on to play a bullshit free game.

Avoiding tilt completely isn’t really possible. We’re all human and as such we have our bad days and our good days. It is however super important to have the ability to recognize and remedy tilt. Being able to understand when you’re playing worse than you normally are due to frustration, feeling hopeless, and what have you will make you a better and healthier player in the long run and it’ll raise your enjoyment of the game. Understand that neither success nor failure is ever final and that even the very best players sometimes get stuck in a rut or a hopeless match and you’ll already be well on your way to being a calmer and more rational player. Hopefully this guide has helped a bit and will help you avoid tilt in the future. If you have any questions or remarks feel free to hit me up in the comments!