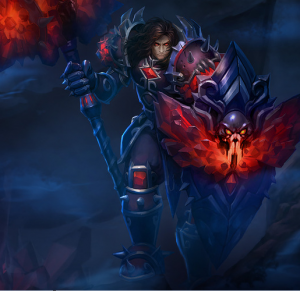 League of Legends is a MOBA. It is similarly structured like his relatives Dota 2, Smite or Heroes of Newerth. In League of Legends you have three lanes and the jungle in between. The three lanes are called the Midlane, the Botlane and the Toplane. In these Lanes so-called creeps will spawn periodically from your Base, the Nexus.

If you kill these creeps you get gold. With gold you can buy items. To get gold from creeps you need to last hit them, last hitting means that you deal the killing blow on them.

Especially the support role is very beginner friendly because mistakes are easily forgiven, they don’t snowball as easily as when you are playing a different role. Snowballing basically means that when you get an advantage over your opponent, you can use that advantage to extend your lead even further. As a support you don’t have to last hit which is another big advantage as well. Only exception to that rule is when you play a melee support with the

support item but even then this item helps you get lasthits fairly easy.

This guide will teach you the basic rules of the support role. As a result you will get better and climb the ladder. This guide is a first, in a series of  five articles on League of Legends roles.

If you are new to League of Legends and want to learn how to play support or if you never really looked at the support role this piece will help.

Now, let’s start by choosing a champion who fits your play style. You have a variety of support champions to choose from. Each champion has different goals they want to achieve.

The following will give you an overview of the champions if you click on their icons. If you just started to play I advise you to master one champion at a time. Trying to learn a lot of different champs at one time can be very difficult. These four heroes are great for beginners. I suggest that you look at their abilities and decide who looks most fun to play, on the base of your first impression.

Janna/Draven: You can kite enemies with

, allowing your ad carry to get hits on them without getting hurt. Shield him

to negate any incoming damage. You can also use

to boost your ad’s attack damage. Combine it with the ad bonus from

when you go offensive. Janna really shines at keeping enemies away from your ad carry.

works great against aggression from ganks. Note that Braum’s

. This lineup is really agressive and bursty.

combo stuns the enemy almost 2,5 seconds. Use this combo with

, when you  want to kill someone. Since Taric is a very offensive support the only defensive spell he has is

to engage. When your ad carry is in trouble give him heals and some movement speed

. Sona is a fairly defensive support.

After picking your champion you need to know which masteries, items and runes to use. For that matter I recommend  you go to www.probuilds.net. A lot of pro players use different builds, don’t get confused by the amount of the sheer variety, you can try out what feels best for you. Exploring your own play style is a part of getting good.

The support usually goes to the bottom lane with his ad carry.

As the name implies the support role helps their team to achieve victory by enabling them to get kills and objectives, such as the Rift Herald, Baron Nashor or the Dragon. One of the main tasks involves peeling enemies from their ad carry which means, to use your abilities and items to hinder enemy assassins from killing your ad carry.

Support champions are generally very weak, they need at least one more person to kill someone. This may vary on the amount of kills the support got. This segment will be divided into the early game, mid game and late game. In these sections you can learn about your job in the different times of the game.

The Early Game lasts roughly 10 to 14 minutes. In this time period you need to enable your adc to farm as much creeps as possible. You can achieve this by not leaving your ad carry’s side. When he roams you frequently roam with him if he decides to port back you generally port with him. If he decides to go aggressive on the enemy botlane you mostly go aggressive. When you are laning you need to always stand in front of your adc,  that way he can farm freely and if the enemy botlane decides to harass or engage you can immediately guard him.

The general rule is, if the possibility is given you need to absorb as much damage as possible because the support should rather take the damage than the ad carry and he should rather die than the ad carry. Supports always walk on thin ice, you can’t go to defensive because your ad carry will suffer, and you can’t go to aggressive because it can result in getting caught out. What differentiates good from the best supports is to find a nice balance between positioning aggressively and defensively in lane.

When you go back to base the first or second time you need to buy a Sightstone. You can buy it for 800g

and switch from the Warding Totem

to the Sweeping Lens

. These Items are essential for every support. The Sightstone enables you to place wards, the item itself has 5 charges, they are refreshed every time you go to the base.

Since you have the Sightstone, the Warding Totem is useless so you can buy the Sweeping Lens. With this item you can clear wards in a small area every 2 minutes. Use it at the dragon area when your team is about to kill dragon or remove the ward in the tribush at botlane or use it on the bushes in lane. Make sure you have as much uptime on 3 wards as possible. In the early game you wanna place your wards around the dragon area and in the lane bushes to prevent ganks from the enemy teams jungler.

This portion of the game can last up to the 30th minute mark. At this point the laning phase ended and you and your team should focus on taking objectives. Your task is to follow your team and support them. Warding crucial areas such as the area around Baron Nashor is important to succeed. A lot of teamfights will arise in this area of the map. Supports need to make sure they defend their AD carry and AP carry, try to use your abilities to disable enemies who try to kill them.

A precise and impactful usage of your abilities can force a bigger impact than just using them randomly. At this point you should have a few bigger support items who heal or give shield. Use them to defend your teams carries. Again I can’t stress the fact enough to use your support opportunities precisely, a good Mikael’s Crucible

can change the outcome of a teamfight. A well placed Shield is as impactful

. When you think about it, Supports have a lot of power.

In the late game you usually have a full item build, if you decided to build a lot of support items your task doesn’t change much from that of the mid game. Do not leave your teams side. If you get caught out trying to ward alone it can cost the game very easily. In fact if anyone gets caught going alone in this stage of the game, you get a huge disadvantage because the death timers are so long.

At this stage of the game, when almost everybody has their full item build, single deaths are even more crippling because every single player has a lot of damage and thus a lot of impact on teamfights. If you decided to go with a bursty support, Annie for example, you are as strong as an AP carry. In the late game and you can usually one-shot enemy carries. Dont forget to buy an elixir when you have too much gold

The support role is very impactful and hard to master, if you like to enable kills and defend your teammates then this role is for you. When you play a lot of support and you get the hang of it you will become better. Don’t forget the most important rule of a good support: if you have the chance to take damage directed at your AD carry you should to take it.