Usually it is pretty difficult to decide on a decent gaming mouse. But if you are already set on a Logitech mouse the decision is a bit easier. A wide variety of Overwatch Pros are using Logitech mice (and especially the G Pro). Now, you might know that the Logitech G403 and the Logitech G Pro are very similar. This article will give an honest opinion on the differences of these two mice. Interestingly, deciding on a G Pro vs Logitech G403 is pretty much entirely a matter of preference since both are the same on the inside.

The G Pro is the smaller (and lighter) mouse of the two. It weighs in at about 85 grams (without cable) compared to the G403’s 90g, though the G403 comes with an added 10g weight, making it around 100g with the weight added. I personally found that the G403 felt a bit more balanced after adding the weight so I left the weight in there.

The G Pro has a straightforward ambidextrous design, though it only has side buttons on the left side, so left-handed gamers will have to sit this one out if they want to use the side buttons comfortably. The shape is also unlike many other mice out there (with the exception of some of the Logitech models this one was based on of course) and it is a particularly small mouse, so the design will not appeal to everyone straight away.

Aside from that there’s nothing really standing out about the G Pro. Its simple design made popular by top competitive esports professionals’ (dixit Logitech) will rightfully remind a lot of people of Logitech’s G100 and G100s mice, which are still widely popular among gamers. The shell is entirely made of plastic with a matte black finish, so no rubber side grips or anything of the sorts. The design is finished off with a stylish RGB led strip along the back of the mouse and an RGB illuminated logo. 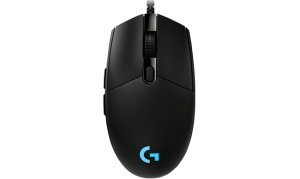 The G403 is a bit more ergonomically shaped and therefore fits right-handed players better. It also features two side buttons on the left side and has rubber grips on both sides. The rest of the shell is also plastic with a matte black finish. The left and right click buttons also have a slight groove in them. The scroll wheel has a thin RGB strip and there’s also an RGB illuminated logo on the back of the mouse. 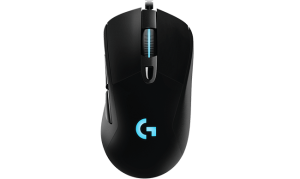 Personally the shape of the G403 fits my tastes a bit better. I like larger mice (my hands are 18cmx9cm and I use a mixture of palm and fingertip grip) and the ergonomically shaped form factor also sits well with me. Generally though both mice felt comfortable to me even after prolonged usage during intense gaming sessions. The G403 is definitely a lot larger than the G Pro though so if you have large hands I’d give the G403 a firmer look than the G Pro.

As mentioned before both mice have the same internals. They feature the Pixart PMW3366 sensor, which is as close to perfect as you can get right now so the sensor performance on both of these products has been stellar. Feel free to have a look at our Perfect Sensor List for comparison with other sensors. ‘Perfect sensor’ in this case means no spinning out or tracking issues or any of these shenanigans. If you miss a shot using one of these mice it’s all on you (or lag, tick or whatever you can come up with) and it’s an absolute pleasure to use such a responsive sensor.

Both mice also have Omron switches, though the G Pro’s clicks are way lighter than the G403’s. I found myself accidentally clicking the G403’s buttons quite often at first (I came from a Steelseries Rival) and though I’ve gotten used to the clicks on the G403 by now I found that the G Pro’s clicks were so light that it became a slight annoyance to me at a certain point. That is obviously down to my grip style and the way I use the mouse and I have no doubt I could also get used to the G Pro’s buttons after some time, but I thought it was worth the mention. So the clicks on the G403 are more my kind of thing, but I have to say that the side buttons on the G Pro feel better to me (they seem to have less travel time).

The scroll wheel on both mice performs like it should. I had no rattle on my copies and the scroll wheel isn’t too loud on the mice, which is something I personally like as well. A slight downside to both (though it’s more noticeable on the G403) is that the middle mouse button is a bit stiff to click. For me personally that’s not really an issue since I only use that button when browsing or working but if you use the middle mouse button for ‘fast’ actions (such as melee) then it’s definitely something worth noting.

Comfort is great on both as well. My hands tend to get pretty sweaty during long gaming sessions when it’s hotter than usual and that can sometimes lead to uncomfortable situations with certain mice (I can’t use a gaming mouse with a glossy surface, for example) but both of these handle all of that admirably. I also felt no pain or cramps whatsoever even after hours of gaming.

All in all I can say that the tracking and sensor performance of both of these mice (which is obviously one of the most important aspects for FPS gamers) is absolutely spot on, though both have (very) minor downsides in other areas. That doesn’t change the fact that the new Logitech mice are the best ones I’ve had the pleasure of using whilst gaming though.

So, who wins the Logitech G Pro vs G403 decision?

Logitech has really hit a home run with these in my opinion. It is a bit strange to see that they chose to market the G Pro as ‘the definite professional gaming mouse’ and shove the G403 in a ‘budget’ lineup (along with something like the G213 keyboard, which is not on the same level in its respective area of peripherals as the G403 at all) because both have the exact same internals. So it basically just comes down to what kind of shape you prefer and the size of your hands. Also, if you are a left-handed player you might prefer the ambidextrous G Pro if you can live with the side buttons. Regardless of which one you choose; you will get a top tier gaming mouse fit for professionals either way. As always, if you have any questions don’t hesitate to shoot me a Tweet or a comment on here.