Top 8 Cards to Craft When Starting Out in Hearthstone

Dust (Hearthstone’s currency to craft cards) is hard to come by. It can take months of doing quests and playing arena to earn the dust you need. Deciding on which cards to craft can be a difficult decision and spending dust on a bad card can be quite disheartening at times. So, if you are just starting out, these eight cards fit in most competitive decks and can be great alternatives if you don’t own particular cards. These creatures should be in the arsenal of every competitively-minded Hearthstone player.

We chose these non-class-specific cards especially so you can use them in different archetypes and classes. They are the staples of competitive Hearthstone, you won’t regret crafting them. If you wonder how we are analyzing them you can read more about that here.

The good old Shredder is probably the defining card of the current meta game. In terms of expected value it blows most four-drops out of the water. It is often a 6/6 on the vanilla test and can be crucial in building a board state. The upsides of getting a decent random two-drop far outweigh the downsides of the occasional [Doomsayer]. Mech synergies are just the icing on the cake. This card can fit in pretty much every deck. It is that good. This Goblin vs Gnomes common can be crafted for just 40 dust. It should be one of the first cards you craft.

Good creatures that replace themselves with a card are very hard to come by. This rare Drake from the original expert set does fall short on the vanilla test (it’s a 4/4 for 5) but the card draw and spell power make this extremely valuable. It is mostly used in midrange and control decks and can set up great plays with [Lightning Storm], [Backstab] or [Consecration]. In the late game it puts a decent sized minion on the board and refills your hand. You usually shouldn’t try to replace minions with unique effects (like some legendaries) but if you are desperately trying to substitute a five-drop like [Loatheb] or [Sylvanas Windrunner] this might do the trick.

Another rare from the early days of Hearthstone. [Knife Juggler] is a spectacular two-drop that easily surpasses the vanilla test (it’s a 3/2 for 2) and fits several roles. This card can be played early to establish a board and put out some pressure. In the later stages of the game the ability can be used to clear minions with low hp and set up favorable trades. Its synergy is remarkably easy to activate because you are most likely going to play creatures in your deck. It also synergizes especially well with Deathrattle Minions like [Piloted Shredder], [Haunted Creeper], [Harvest Golem] etc. Token generating cards like [Muster for Battle] or [Living Roots] work great as well.

This card can look quite unimpressive on the outside but a cheap silence effect is needed in a lot of decks. Several legendaries like [Sylvanas], [Tirion Fordring] or high value cards like [Savannah Highmane] have to get answered efficiently and [Ironbeak Owl] does the job tremendously. Additionally, even in aggressive decks, this little guy can clear taunts and attack the turn after. One Owl in your deck should probably enough though. It’s just 40 dust, use it.

I know this card is expensive but [Dr. Boom] is probably the best card in the game right now. If you want to craft a legendary this beast of a seven-drop should be your first every time. It can completely take over a game. It develops a board state on its own, can stabilize an aggressive opponent and finish him off with lucky bombs. So its not only a 9/9 for 7 with an easily triggered ability but fills every category of the Quadrant Theory in some way. If you are done with the cheaper cards on this list or got lucky and have some dust left, craft this bad boy.

A direct counter to [Dr. Boom]. This card probably wouldn’t be on the list if [Dr. Boom] didn’t exist. He is that oppressive. But even against [Ragnaros The Firelord] or [Molten Giant], [Mountain Giant] or the ever so popular [Fel Reaver] this card can be a total blowout. Played as a vanilla three-drop this 4/2 can be a fine tempo play as well. In any case, you need this against Dr. 7. This 400 dust epic should be high on your list.

One of the first cards spoiled back when Naxxramas was announced, [Haunted Creeper] has been showing up in all types of decks ever since. It is a great early play for aggressive classes like Hunter, where you can benefit from the beast synergy and the three bodies. Midrange decks use it to keep parity and effectively trade with one-drops like [Leper Gnome] or [Abusive Seargant]. This card is expensive. The first quarter in Naxxramas is a whooping 700 gold but it’s worth it. (And you get [Nerubian Egg] as well)

Another great card from Naxxramas is [Sludge Belcher]. Its stats line up perfectly with [Piloted Shredder]’s 4/3 attack/health and the double taunts can stave off early aggression. It’s great on the vanilla test as well with an accumulated 4/7. This card is in the second wing of Naxxramas where you get [Loatheb] and [Unstable Ghoul] so its easily worth the 700 Gold. 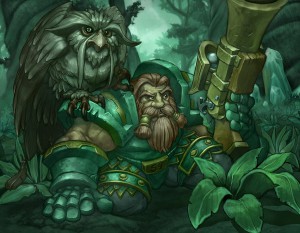 Most of these cards fit into a variety of archetypes. You can probably build decks with all these cards in it and do fine at lower ranks. These minions should be a great starting point for Hearthstone beginners to spend their dust effectively.