Peeking is effective in many situations. Most beginner’s don’t even know about all the possibilities it opens up. They might have seen it but don’t know how and when to do it. Peeking is a method of movement in CS:GO in which you try to get a quick view of an angle or corner without exposing yourself to a potential enemy or overcommitting to an attack. It is primarily a method of gaining information with the goal to minimize risks as much as possible.

There are different methods of peeking: 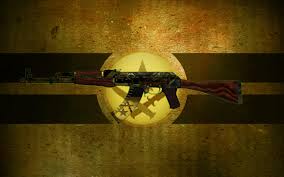 There are 2 different things you want to consider while peeking. Do you just want to gain information or do you want to kill your enemy with that peek. When you wide-peek you commit yourself so much to your peek that you have to make an aggressive play. Close-peeking is somewhere inbetween, you have to decide if you want to stay committed or back off. Shoulder peeking is generally used to gather information. Jiggle-Peeking can be used to gather information visually or combined with pre-fire to clear certain angles. Before you peek an angle, you need to decide which form of peeking you want want to use. Deciding this perfectly needs a lot of practise and experience.

Shoulder-peeking is generally used to bait an awp-shot (gather information). The motion of your player model is so fast that the chance of getting hit is almost zero if done correctly.

Jiggle-peeking should be combined with pre-fire to clear default spots, thus generating map control. Using this method will pressure the enemy into leaving default spots or get punished. It can also be used without pre-fire to gather information in certain situations. 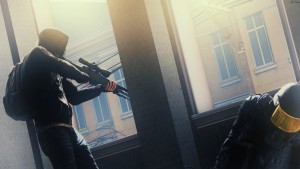 Wide-peeking is generally used to overwhelm your enemy after you have gathered the information that he is at this exact spot. It can be very powerful combined with peeker’s advantage. Wide-peeking is most of the time only a good idea if you are certain that you won’t run into a 2v1 though.

Close-peeking is rarely a good idea, it should only be used with a lot of experience and at the perfect moment, since you expose your body to your enemy really early. It is generally not recommended but can be used to throw your enemy off. It is especially dangerous with pistols like the tec-9 in hand. Note that you generally want to peek as far away as possible from the wall. You will get seen earlier otherwise.

Peeker’s advantage is a principle that is incredibly important to understand while learning how to peek. It encourages offensive gameplay and is a deadly assistance that you should use to your advantage. The player that is peeking an angle is always at an advantage over the guy that is holding said angle. Endless24 from the reddit community explained the principle behind it really well:

It’s due to “clientside prediction.” The client simulates the results of your actions, such as movement, on its own based on the information it has when you make the action. This is how the game responds instantly to you pressing a button instead of waiting for the server to respond to the button press. Once it receives the next update (“tick”) from the server, it reconciles the difference and shows you the server’s view of the game as it was when the server sent the update. The consequence is that your client’s view of the game is always a little inaccurate, which in this case can actually be an advantage as your client is prematurely showing you something that, if your client’s view of the world was the same as the server’s, you wouldn’t be able to see.

In the following gif you can see peeker’s advantage explained. Note that this video was simulated with a Ping of 150.

It is fairly unlikely to meet an opponent with such a high ping, though it gets the point across perfectly.

Shoulder- and jiggle-peeking are apart from using molotov’s, flashbangs and smokes, the most effective way to gain map control in CS:GO. You shoulder-peek by only showing a small part of your shoulder/arm. Jiggle-peeking should always be combined with pre-fire to pressure the enemy into backing off. If you just play for information without the intention of killing your enemy, against for example an awper, you dont want to expose yourself as much, so you just shoulder-peek. The reason why you don’t want to try to pre-fire an awper is, because the odds are heavily stacked against you. It is possible that you get the pre-fire headshot in, but more often than not the awper will win out in such an exchange, since you never know if he’s crouched or not and other variables.

After baiting the shot you can either decide to peek out while he’s waiting to fire again or play off the information and decide with your team what to do next. Another important thing to know is that you can shoulder- and jiggle-peek without making any kind of sound, thus making it way harder for the awper to be prepared for an incoming peek.

Don’t take the information from just one peek. It is insanely hard to hit somebody that is shoulder-peeking, especially when you are executing it perfectly. If you don’t hear a shot the first time around, that doesn’t mean that the spot you baited is clear. Again, there are many variables. The awper could anticipate the shoulder-peek and not shoot intentionally. He could also miss out on pulling the trigger because of lacking focus/bad reaction time. So bait your enemy more than once before assuming that the spot is clear to make sure.

This is how a perfect shoulder-peek should look like:

The way you shoulder-peek is by strafing to the left/right, then pressing your right/left key once your arm is visible for your enemy.

This is how it looks for your enemy, you are super hard to hit. Because of this reason NBK does not even try to hit his shot.

This is how a perfect jiggle-peek + pre-fire should look like:

This is done in the same way as shoulder-peeking, just that you have to peek a little further and tap/burst in between.

Wide-peeking is generally done with a teammate. In CS:GO you always want to trade efficiently. If your Teammate doesn’t get the kill, you can re-frag. This is where wide-peeking comes in. The first guy in should be peeking wide while the second guy stays close, so you are not blocking/killing each other. This way a frag is almost guaranteed and its also likely to happen that you win the situation without someone dying.

Wide-peeking is also a good option to overwhelm a person thats in a known position. If a counter-terrorist is trapped at car on dust 2 for example. There is no way he’s going to go alive out of there if you combine a widepeek with pre-fire into spray. Wide-peeking can also be combined with crouching. There are many situations where a wide-peek can be considered viable, but at the end of you day your experience will decide for you.

As said earlier, close-peeking is rarely a viable option. It will expose your body way too early, resulting in getting shot earlier. It is a viable option combined with your own or a teammate’s flash though.

This way you can turn situations where you are stuck in a tricky position like cubby on inferno or car on dust 2 around. It is also a good option if you plan on doing an explosive play in an eco or forcebuy situation. Pistols are, as most people know, most effective on short-range. So in this sitution a close peek is definitely a reasonable decision.

In the following video you can see how you can use the wide- and close-peek to your advantage. In this situation you have to peek close because of your flash-line-up. You also want to wide-peek because you want to evade the enemies crosshairplacement. Once enemies are blind they tend to start shooting. Since they will have their crosshair close to the wall you want to peek wide to avoid their shots.

Peeking as an awper

Obviously one of the most effective tools of an awper are shoulder-peeks, as explained earlier. As an awper, you must have a big repertoire of different peeks. Try to mix it up to not be predictable. You can shoulder-peek and follow it up with a re-peek, ask for a flash from your teammate or even ask your teammate to jump-bait the enemies shot.

Generally you will always want to remember that while peeking you have the momentum. As explained earlier, you should always trust in yourself and use the peekers advantage. You can also combine crouching into your peek to bring your velocity to zero instantly.

Here you can see KennyS using the speed he gets from a bunny-hop to his advantage. Be creative!

Once you have played enough, you will have a feeling for the right timing. Before though, you should remember that you will almost always start off with shoulder-peeks and pre-fire. This is, apart from flashes and molotov’s, the safest way to gain map control. The other ways of peeking should be used depending on the situation. There is no certain formula, only guidelines.

Apart from crosshair placement and shooting rhythms, proper peeking is probably the most misunderstood and/or unknown method to becoming a good CS:GO player. It is used by pros all the time, while most people don’t even notice it.

Integrating this simple but effective method into your playstyle will help you greatly and make a way better player of you. I know that this seems a little advanced, but try to learn this method since it’s an essential of CS:GO.